So what can we expect on the next generation Apple Watch? Will it be a simple ’S’ style upgrade with a full 2 year upgrade cycle or will Apple launch a much more feature packed and revolutionary device?

Although rumours point to Apple releasing an S upgrade rather than a completely new and redesigned watch, here are a few things we can think of that Apple may include as part of the next generation Apple Watch.

With the launch of the Apple Watch for the first time, Apple realized that the biggest weakness for the Watch was the slow load times for apps due to it being tethered to an iPhone rather than running on the device itself. Apple soon rectified this issue by introducing Native Apps as part of WatchOS 2 with Apple making it a standard in Apple Watch apps development since 1st June last year. What this translates to are faster load times and better switching between apps as they all run native to the device rather than being tethered to an iPhone.

Apple will definitely put a more faster and efficient processor on the next-gen Apple Watch. Rumours point to the new ARM Cortex A32 processor being the one that Apple might choose. ARM processors are no stranger to Apple’s iOS devices. The Cortex A32 brings the ultimate combination of fast performance with better battery life due to its lower power usage. “The ARM® Cortex®-A32 processor is the smallest, lowest-power ARMv8-A application processor”. claims ARM who also said, “ The Cortex-A32 delivers 25% more efficiency (performance per mW) than the Cortex-A7 in the same process node. Cortex-A32 delivers this efficiency through a combination of both performance improvements and power reduction.” It is important to note that this chip supports only 32-bit environments which means lesser power consumption, beneficial for devices like the Apple Watch where its important to strike the right balance between power consumption and performance.

The new processor has also seen an improvement in media playback functionality, all pointing to new and improved Apple Watchd if it is ever implemented. 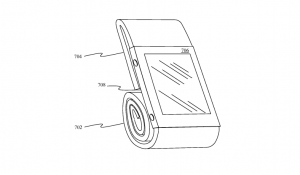 Apple recently filed a patent for a so-called “Magnetic Wristband” which in theory is a magnetic wristband(duh!) with additional functionality built-in. Apple’s magnetic band aims to use embedded sets of magnets that would connect and hold the Apple Watch in place which is more like a straight forward application rather than a ‘new feature’. But it is when you take the watch from your wrist that the new features come into play. The band for example can act on its own as a stand for the watch, possibly even utilizing Apple’s Nightstand mode.

Apple is expected to bring in cellular capabilities to the next generation Apple Watch. This will not be the first smartwatch to implement such a feature with Samsung bringing it with the Gear S.  All this means that the Watch can now be completely independent from the iPhone(or atleast for the most part) and can mean better and more wider ways of bringing in something new to apps for developers and increasing its independence.

This is a big one. Right before the public launch of the Apple Watch, there was a lot of concern over the battery life of the Apple Watch but Apple claimed that the Watch would possess an “All-day” battery life and would have a charge cycle similar to the iPhone. However, having a longer battery life is more important than anything (other than telling time!) on a smartwatch. Skipping an everyday charge cycle routine means that users can now use the intelligent and built-in tracking system to track and monitor health factors during sleep. Apple is also said to be working with LG and Samsung to produce thinner OLED display panels to accommodate a bigger battery in the new Watch according to gforgames.

Apple could potentially open up the secret port that is on the Apple Watch. A company called Reverse Strap made use of the Watch’s port capabilities and used a smart design to use a strap as a battery and claimed to hold charge for upto a week which is fascinating. But with the recent release of Apple’s WatchOS 2.0.1 update, Apple modified the External Access Protocol to disable this feature. But Apple could still open it up with the new Watch for more smarter integration with other similar technologies.

Rumours also point to a FaceTime camera on the next-generation Apple Watch. Currently the Apple Watch only supports FaceTime Audio calls so it only makes sense that Apple may enable compatibility for FaceTime video as well. It said to be placed towards the top bezel of the Watch. Its important to note that this could be part of a prototype model which may not necessarily pass through as the final model. Whether people would prefer to FaceTime on their watch rather than a (relatively) big screen device remains to be seen.

Apple may bring additional sensors to the Apple Watch, primarily health related. Before the original Apple Watch was launched, rumours pointed to the Apple Watch having a ton of sensors for different health metrics but most didn’t make it to the final product. So there is a chance that some that were developed during that time maybe be perfected and introduced on the new Apple Watch. Apple has taken deep interest in the Health sector and aims to bridge the gap between personal smart devices and health monitoring.

Apple may also bring better integration to HealthKit and HomeKit to the Apple Watch enhancing the possibilities of what could be done using the Apple Watch on its own. But how they implement this remains to be seen.

The current Apple Watch requires to be tethered to an iPhone for many of its features except a few like music playback, Apple Pay and activity tracking. But this dependability means that the Apple Watch will be much slower and less useful on its own. Apple is said to be making the second generation Apple Watch more independent from the iPhone and has reportedly named the internal project as “tether-less”. This could mean way faster load times and better usage of the Watch on its own. However, large data applications and factors such as OTA updates maybe done over a tethered connection using an iPhone.

Another highly anticipated and requested feature is a ‘Find my Watch” function similar to the ones existing on the iPhone, iPad and the Mac. This can finally be a reality thanks to a new wireless chipset that utilizes a WiFi triangulation technology rather than conventional GPS.

It is also worth noting that Apple is not expected to bring support of the Apple Watch to Android devices, atleast anytime soon. It’s just not an ‘Apple thing’ to do!

So that’s all we can predict for the upcoming Apple Watch 2, while most seem to be reliable and reasonable upgrades, we still cannot be sure on what features and functions went through to the final cut of the product until its official announcement which probably might be alongside the new iPhone this year.

EDIT: Modified to account for the probable launch of the new Apple Watch.

How to force Windows 10 upgrade on your system?