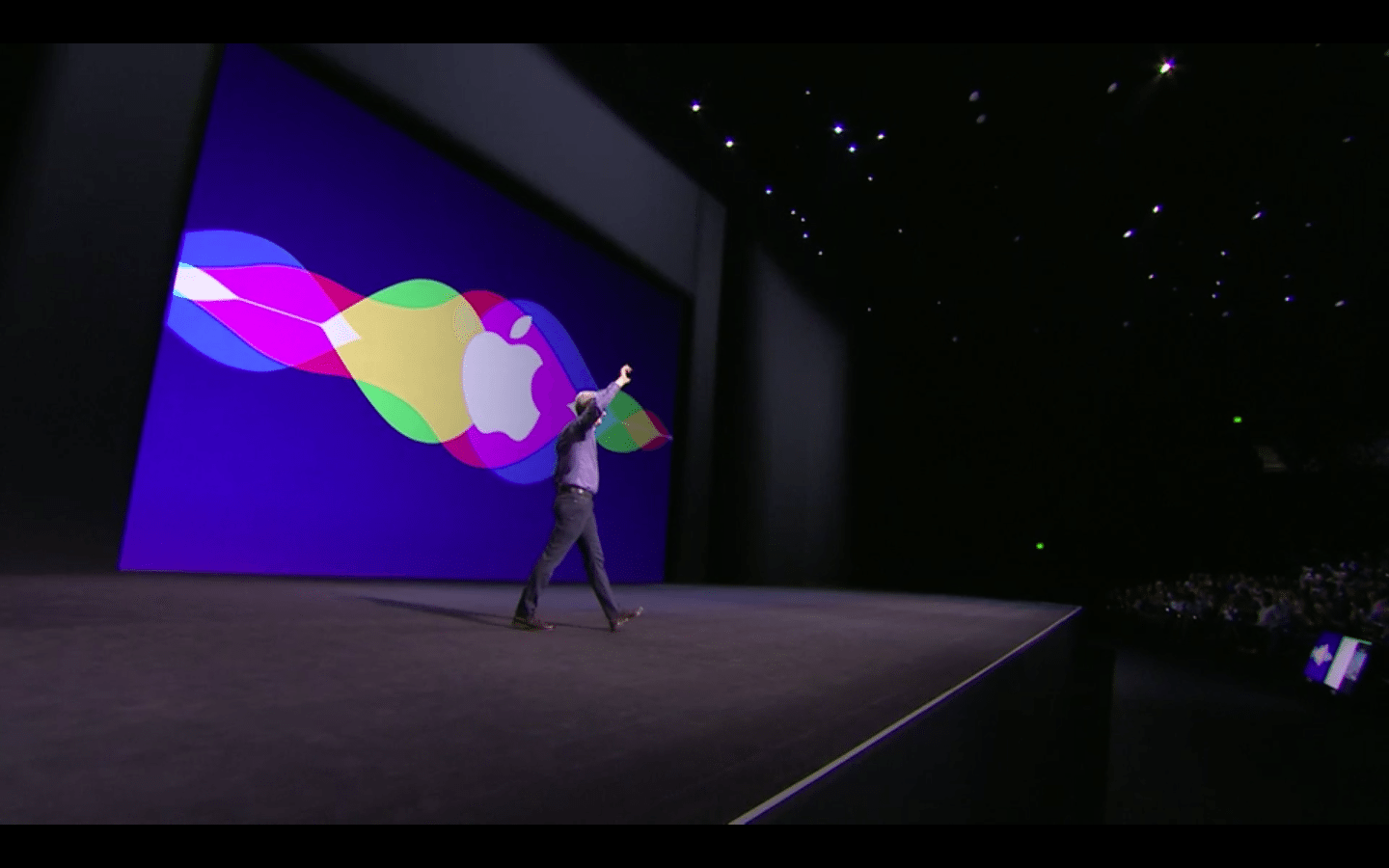 Apple just ended its most highly anticipated event yet and we have a lot to share, So let’s get right into it.

Apple kicked off the event with the introduction of new Apple Watch Sport watch and band colors. The Sport now comes in Rose Gold and Gold in the same Anodized aluminum body in addition to existing models. So those who fancied a gold or rose gold Apple Watch but didn’t want to spend thousands of dollars, you now have an option. 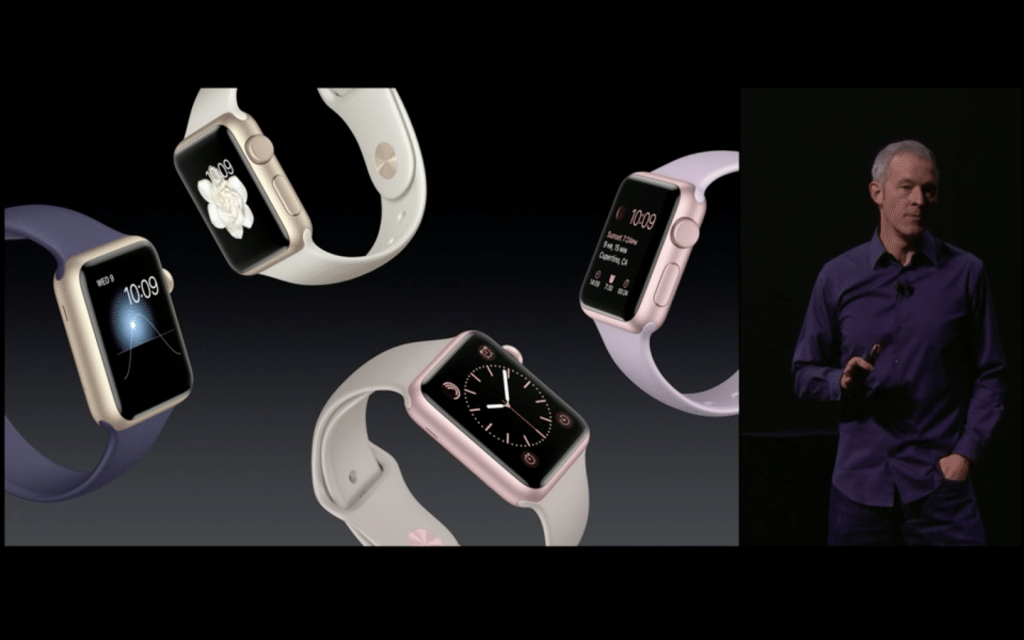 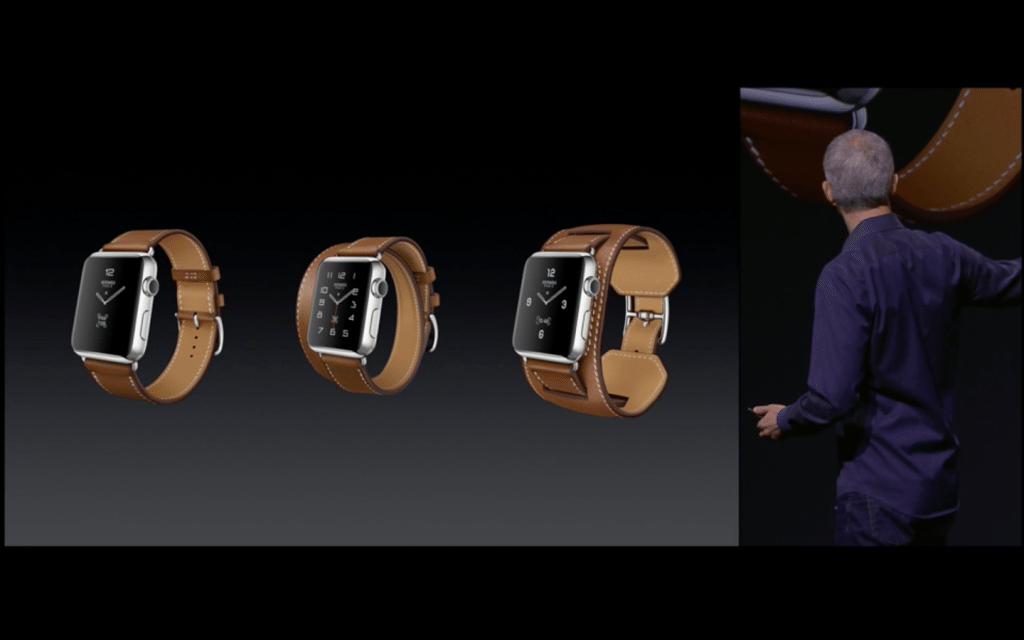 Apple also added a Product RED version of its watch bands and a few more color selections to increase the options for someone looking to buy one. Apple also talked about WatchOS 2 bringing some great features such as native apps, live watch faces, complications and time travel. They also know let developers access hardware features such as the heart rate monitor to utilize within their own application.

Apple then took the wraps off its highly anticipated Large screen iPad Pro which comes with a 12.9 inch screen giving a resolution of 2732-by-2048. It comes packed with an A9X which doubles the performance levels of the A8X. Furthermore it comes with 4 speakers with 2 on either side to provide stereo effect and which Apple claims will automatically adjust balance depending on the orientation your holding the iPad Pro to deliever great listening experience. The iPad itself comes in at 6.9 mm thick and 1.97 ibs. 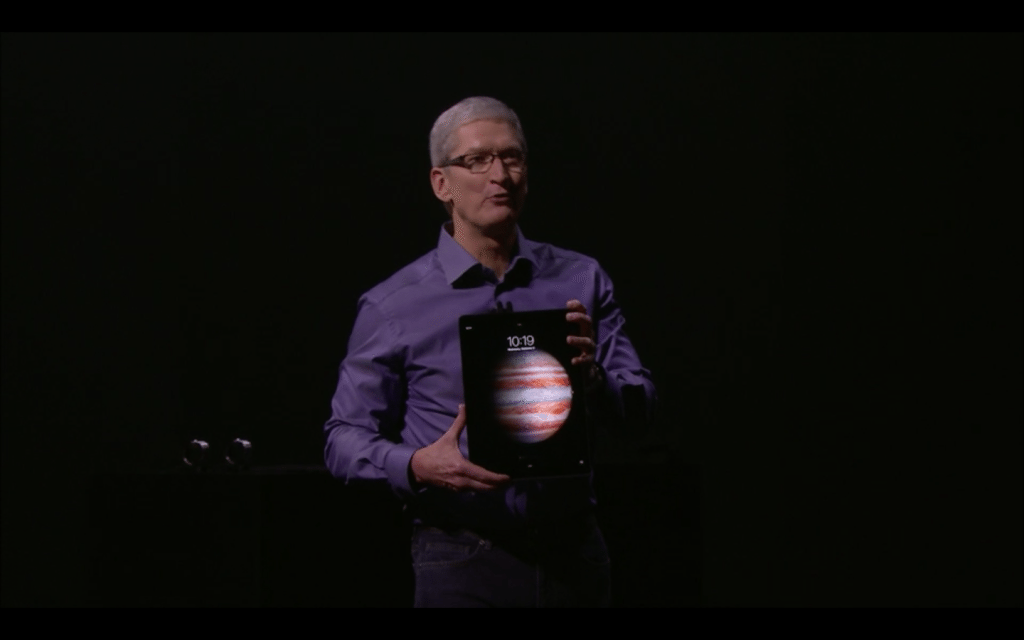 The primary reason Apple chose 12.9 inches as its size for the screen is so you can run 2 portrait apps side by side in splits screen mode simultaneously. All this in addition to iOS 9’s multitasking features.

Apple also introduced its version of a stylus called ‘Apple Pencil’ which enables precision drawing and writing capabilities. The stylus can be charged using a lightning port that can be plugged straight into the port of the iPad Pro for charging. It costs about $99 and is sold separately. 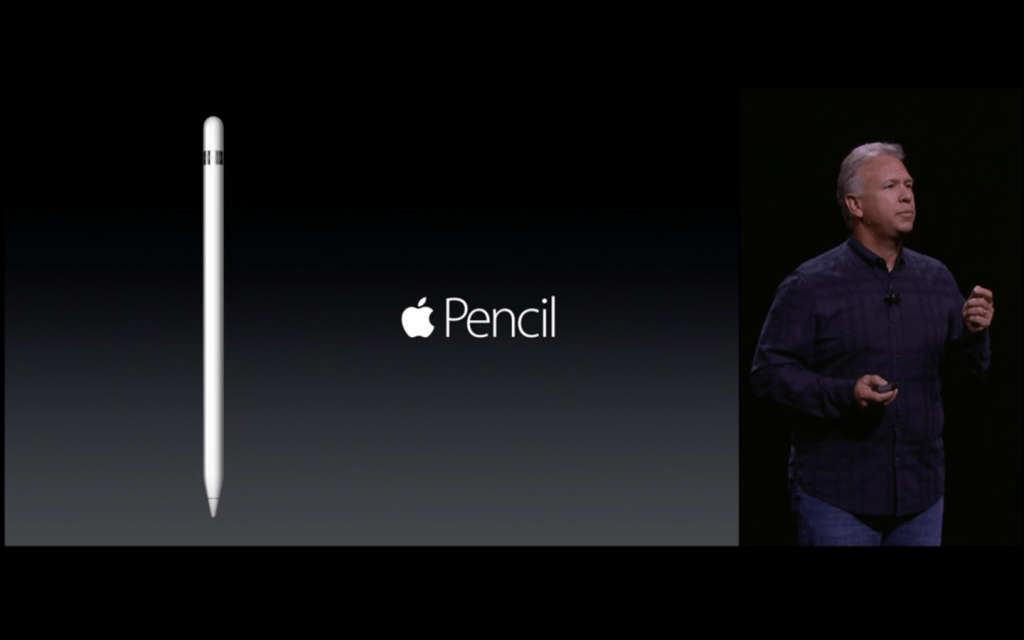 Another accessory is the ‘Smart Keyboard’ which is also an exclusive for the iPad Pro. The keyboard connects to the iPad using a special connector consisting of 3 magnetic pins that allow for data transfer and power. This keyboard also acts as a cover when closed just like other smart covers. 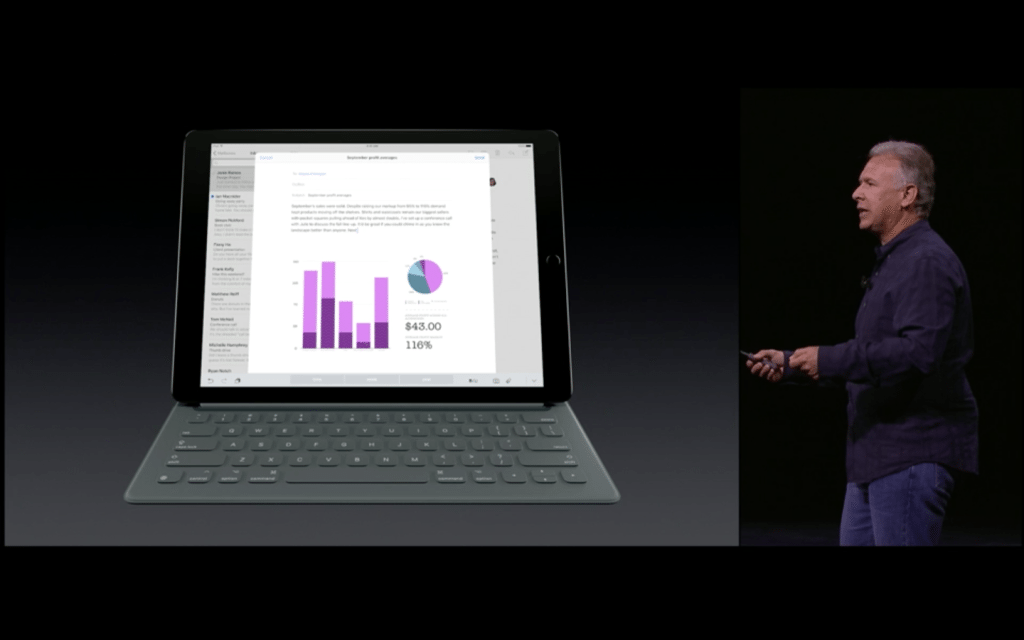 Apple also updated the iPad Mini 4 which is now much more thinner in design and has a improved retina laminated glass display. The cameras have also been upgraded with a faster image processor and better optics and sensors. There have also been spec bumps like a A8 processors with the M8 motion coprocessor.

Apple also took the covers off its new Apple TV which physically is 10mm thicker than the previous version and comes with HDMI, USB-C and ethernet ports. Apple seems to have dropped out the optical audio port from its previous model in the new version. It runs Apple’s A8 chip and has 802.11ac wifi as well. 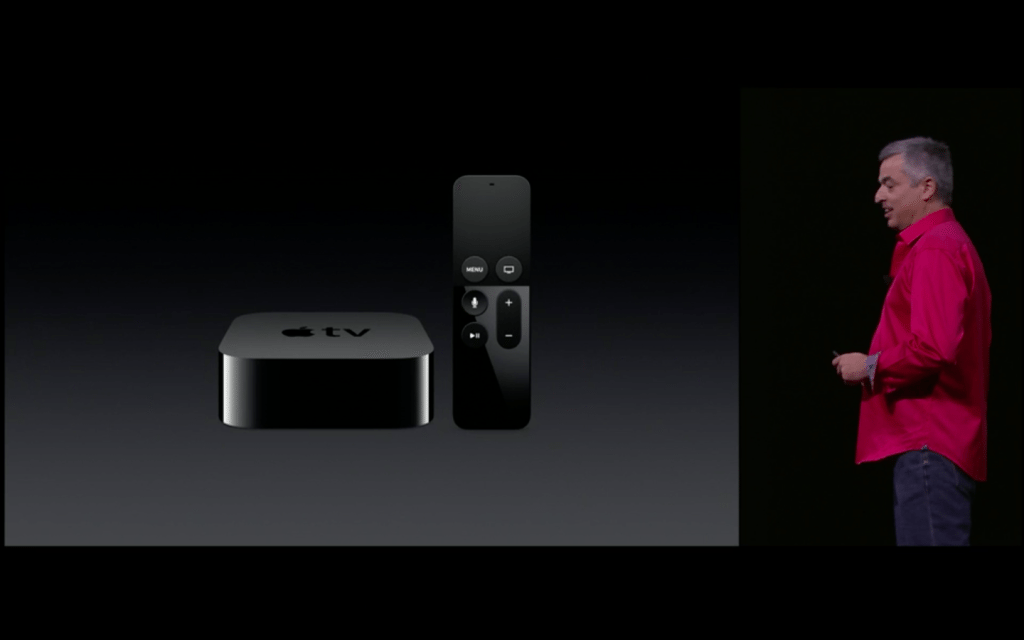 The new Apple TV will come with a new remote which consists of a touchpad on top and below comes with physical Home and Siri buttons along with a volume rocker. The remote has a built in battery which can be charged using its lightening port and comes with a ‘months’ battery life under normal use on a single charge according to Apple. It also connects via Bluetooth which does not require line of sight for operation.

Apple has concentrated more on Apps and a heavier Siri integration. Siri now provides much more smarter results and can pinpoint movies with specific actors or even forward to a part where someone is starring in a movie all on its own. The new Apple TV however does NOT support 4k resolution which is sad.

Apple also now allows games to be played on the Apple TV using the Apple TV remote or some other controllers and you can also play multiplayer using an iPhone or iPad.

iPhone 6S and 6S Plus

Apple introduced the new iPhones with an additional Rose Gold color option in addition to the current lineup and comes in the same 16GB(Click here to know why 16GB won’t be enough for your smartphone), 64 GB and 128GB variations starting at $649 for the 6S and 6S Plus at $749 (To know which one will be right for you, click here for our guide). The new iPhones are 7.1 mm and 7.3 mm thick respectively with the 6S weighing in at 143g and 6S Plus at 192g.

The new iPhones feature a new ‘3D touch’ display which enables a third dimension to the touch interface giving you further options upon clicking and holding selected apps and interface. This can not only be useful in and around the interface of iOS 9 but also inside of apps like Instagram or in a gaming environment where a 3D touch will provide more options in a dynamic way providing a better gameplay. Apple has also integrated the M9 motion coprocessor inside the A9 chip which enables it to run continuously enabling features like ‘Hey Siri’ at any time without having your iPhone plugged in. 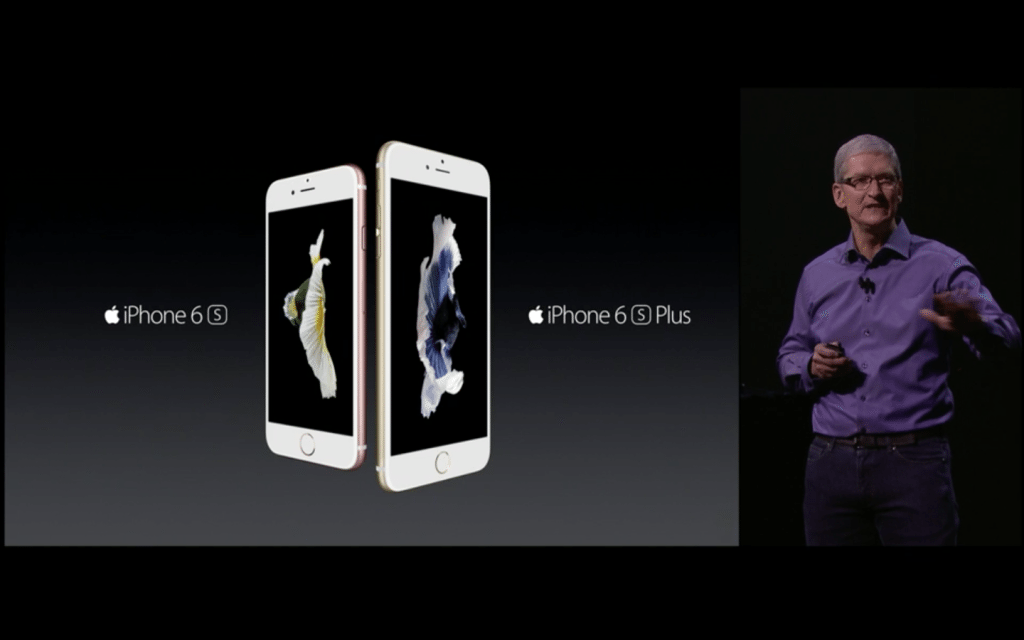 The new iPhones have 12 megapixel iSight cameras with the 6S Plus having Optical Image stabilization. For the first time Apple enabled 4k video recording on any of its devices at 30fps. It also has a great image processing unit giving a great balance of contrast and exposure under multiple lighting conditions. Apple also upgraded the new iPhones front facing FaceTime camera to 5 megapixels and have also added something called a ‘Retina Flash’ which basically makes your screen act like a front facing flash giving you a similar effect of the true tone flash at the back. All this is to allow you to take greater selfies.

The new iPhones support over 23 LTE bands which Apple claims makes it the ‘Best phone for travellers’. Apple has also upgraded touch id for a faster response.

Apple has also made some new colour options available for its leather and silicone cases.

Techie Avenue is available on Apple News for iOS users

What Apple’s iOS 9.3 brings to the table

Joe Samuel - July 12, 2018 0
Apple today launched its annual Back to School promotion starting in the US and Canada. The deal, which will run from July 12th to...