Google which not-so-long-ago announced that it will be a subsidiary under Alphabet Inc, has today launched a new logo to mark the new change. The basic concept of Google in its word format remains the same however Google has swapped its old, down to business look to a more soft, modern and fun version using a sans-serif typeface and softer colors.

The logo looks very similar to that of Alphabet Inc which also employs the same modern look. This emphasis a better integration of the service into the Alphabet umbrella. Google claims that the logo has been on a continuous evolution since its inception in 1998. But this is by far the biggest update since its 1999 modification where it decided to stick with its current scheme of colors.

Another part that Google has modified is its ‘g’ logo which is now a capital ‘G’ and composes of its 4 core color scheme right in the letter. Google has already begun rolling out the changes on its primary site: Google.com with a neat little animation and will continue to update its complete product lineup soon. 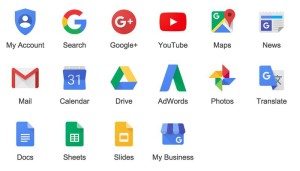 Google decided to change the logo to emphasize that it was no more just a simple website that users visited on an old PC. It was rather a collection of applications, websites and services that can be used on a multitude of devices as long as it has a web browser. “These days, people interact with Google products across many different platforms, apps and devices—sometimes all in a single day. You expect Google to help you whenever and wherever you need it, whether it’s on your mobile phone, TV, watch, the dashboard in your car, and yes, even a desktop” says Google.

Google also indicates that a major factor behind the change was the appearance of its logo on smaller screens. Google wants this new change to reflect across its services. Even the microphone icon has now been modified to reflect the 4 color scheme just like the ‘G’.

“This isn’t the first time we’ve changed our look and it probably won’t be the last, but we think today’s update is a great reflection of all the ways Google works for you across Search, Maps, Gmail, Chrome and many others.” Google wrote on a blog post announcing the new change,”We think we’ve taken the best of Google (simple, uncluttered, colorful, friendly), and recast it not just for the Google of today, but for the Google of the future.”

The best way to turn your iPad or iPhone into an external display for...

iOS 10 brings much needed features and some unexpected ones to iPhone and iPad...

YouTube Red is a $10 monthly subscription service with no ads and a few...