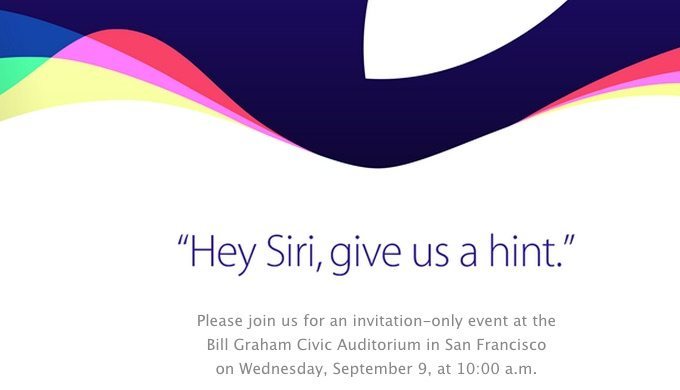 Apple has officially sent out the invites for its September 9th event where its highly anticipated to reveal the upcoming iPhone 6S and 6S Plus along with a new Apple TV. The event is at 10am Pacific Standard Time (PST) and will be held at the Bill Graham Civic Auditorium in San Francisco. The event can also be watched on Windows 10 using Microsoft’s new Edge Browser which supports HTTP Live Streaming Technology which is a standard introduced and implemented by Apple.

Current rumors point to a new camera for the iPhone 6S having 12 megapixels capable of recording 4K video and a new color variation of rose gold or pink along with other usual spec upgrades. Force touch is also expected to make its way to the iPhone providing increased capabilities and implementations similar to the Apple Watch and new MacBook trackpads. The new phones are also said to be slightly thicker due to reinforcements of the frame and usage of 7000 series Aluminum to avoid or minimize problems like Bendgate which was a problem with the current generation devices. Apple is also said to be including new software features like live motion wallpapers similar to those that debuted with Apple WatchOS 2 featured in WWDC 2015. Apple is also said to launch the new iPhones on September 18th this year.

Apple is also expected to announce the much awaited Apple TV which was rumored to be announced at this years WWDC only to be dropped out a few weeks before the event.

The iPad Pro was also highly anticipated to be revealed this year however Apple may provide just a sneak peak. Apple will also officially release OS X El Capitan, iOS 9 and WatchOS 2.

Apple is also expected to unveil a new 4K 21″ inch iMac probably as part of its ‘One more thing’ announcement.

Why beats isn’t as bad as you think!

Getting the official Windows 10 iso